I’ve talked to Mouse several times over the past week.  She’s been in towns numerous times so we’ve had chances to chit chat and catch up.  Nothing really to report, no stories, no drama or trouble.  Nothing even funny or out of the ordinary to write about.  That’s a good thing, right?  Of course it’s not going to make the book we write later very interesting though, ha.  But, everything is going really good for now.  The trail provides, but we know it also kicks your ass.  So, she’s enjoying the hike for now and that makes Mama Mouse very happy.  She’s been with Worm, Heavy D and Flower Power.

She’s ending the month in Connecticut and the next few states are short miles so they’ll go pretty quick.  I just mailed her second pair of shoes, she’s trying to get 700 miles out of eachpair.  We are planning to meet her somewhere around the half way point, within a few miles or two, which should be mid August.  So, since there isn’t much to report, I’ve listed the date, where she stayed that night and the miles she had at the end of the day.   We’ll let her pictures and videos tell her AT story . . .

After the climb up Glastenbury Mountain, lookout tower 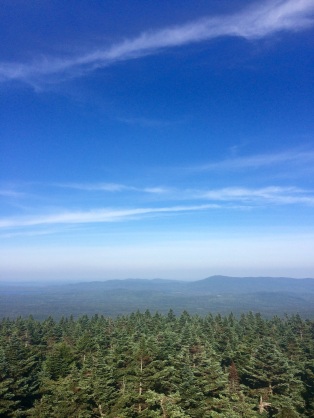 Last year when she reached Mt. Greylock, she got off the trail with Rush and Vulture. Fiddlehead, who she hiked with in the beginning in 2015, was from here and her mother Cathy picked them up and invited them back to her house for the night.  This year when Mouse got there she looked Cathy up (she works at the Park) but she wasn’t working.  So she left her a note.  I’m sure Fiddlehead’s mom was surprised to hear from Mouse and that she was on the trail again. 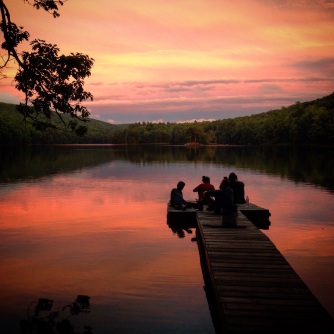 So this is Worm and Heavy D, they were meeting family and heading into town to a hotel.  They invited Mouse and of course no thru-hiker turns down a actual bed and hot shower.  Below is a couple pictures from town day, doing laundry!  Gotta wear whatever isn’t in the washer. . . rain gear, blanket, trash bag, towel.  Highlight of town day Non-dairy Ben & Jerry’s.  That’s frozen gold for a Vegan.  While everyone is chowing down on ice cream, it’s hard to find non-dairy.  Thank you Ben & Jerry’s. 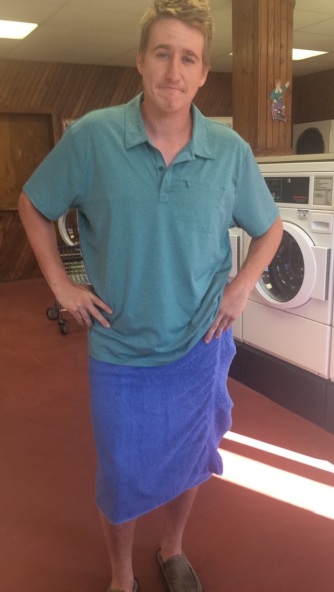 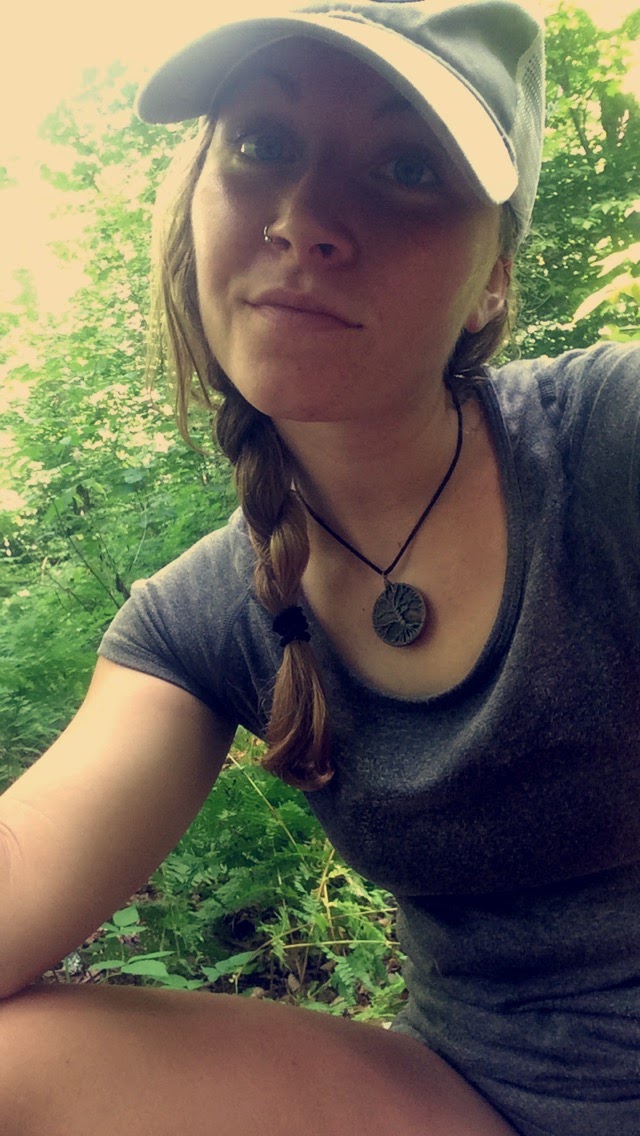 So there you have it. You’re all caught up at 700 miles through week 7. We’re all proud of you Mouse, keep the pictures and videos coming. Happy Trails . . .

So . . . I’ve finally learned to rotate the video, yay!  But now I can’t get the ones I’ve rotated to download.  I’m going to post a few and keep working on the others.  Stay with me and I’ll have it all down pat by the time Mouse is climbing Springer Mountain in Georgia at the end of her hike.  Anyway, she has sent several and I’m sorry I can’t share them all, but I will.  They’re really good and informative.  Things are going really well.  I’ve talked to her several times this week and she is cruising right along.  But I’ll let her tell you all about it.

In the above picture she’s walking across the bridge which is also the VT/NH state line.  The following video is a time lapse of her putting up her tent, I’m sure she wishes it happened this fast in real time.

There’s a video after this (sideways of course) which shows her streak of luck.  She packed up everything and thought she was going to have to  hike another 5 miles, but some hikers came along and told her about a house a mile away that let hikers stay.  So she was very happy to hear that.

So when I talked to her on the 16th and she told me she was in the town with the bridge that the hikers jumped off.  I asked if she was jumping this year.  She said ‘no, I’m all dry and I think I want to stay that way. Besides, I did it last year.’  Then, I see a video on Instagram of her jumping!!  So these comments followed:

Me: Love it . . . But wait, didn’t you tell me this morning you weren’t jumping this year?’ 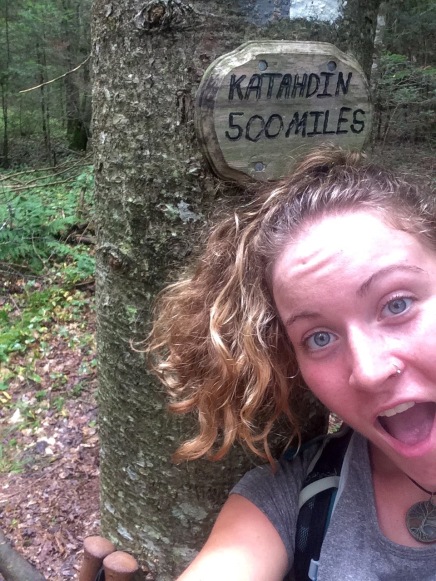 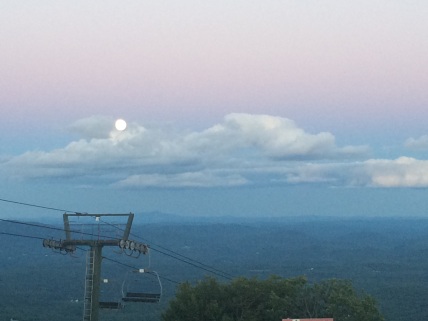 Talked to her this morning and she has crossed into Massachusetts, 4th state!  The next few states are short miles and she’s averaging 20 miles per day, so she’ll churn them out!  Back to working on the videos . . . stay tuned for more.

I’m sitting here trying to make heads and tails out of the chicken scratches that are suppose to be notes that I’ve taken while talking to Mouse.  We haven’t had a lot of contact, so when we do I scribble bits and pieces of info down so I won’t forget anything.  Then I can’t read what I wrote and I forget what words the letters are suppose to be making!!  Good thing she’s sending lots of pictures and videos!!  So instead of the words coming out of her mouth onto my paper and then into the computer . . . I’ll just type in some little tidbits to accompany her eye candy of the trail.

So Mt. Washington is a pretty big deal in the White Mountains.  It has an elevation of 6,288 ft. and pretty much it’s own weather system, dubbed “Home of the World’s Worst Weather!” The following pictures/video are of her time at this mountain.  So, fyi the hikers climb all day over rocks in heat or freezing cold, terrible winds or fog . . . only to find that there is a Auto Road and Cog Railway that takes visitors to the top of the mountain.  Personally, if I were a hiker I’d find that incredibly irritating to think I worked so hard when the person next to me looking at the exact same breathtaking view was seated all the way up.  But, I digress . . .

The track for the railway

So 2 of the above pictures Mouse took because it made her laugh.  There was a long line of people who had not hiked, but rode up the mountain and they were all waiting to try and get a picture from the top.  She had a picture from Mt. Washington from last year, but the weather was not good so it’s not a clear view like she would have gotten on this day.   However, she said there was no way she was waiting in line after hiking up, plus she still had to hike down.  Instead she opted to take a picture of the people trying to take a picture and said it gave her a chuckle for the day! 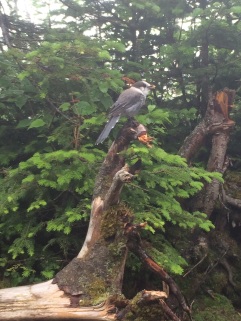 The beautiful, clear day was not good for the hiker who did not lather herself in sunscreen.  I’m not mentioning any names (Mouse) but ‘be sure to wear sunscreen when you’re atop a mountain kids!!’  Her skin was peeling and uncomfortable for days. Also the puffy, cute bird was her lunch date one afternoon.  I hear they had a nice meal together.

July 9/10th – Lincoln New Hampshire, first Zero -0- day!! So I got a call Saturday that she couldn’t get a ride into town.  She wanted me to look in the guide book to see if there was a taxi or bus service.  I grabbed my book and as soon as I said ‘no, there doesn’t seem to be any’ she said ‘gotta go, someone just stopped’.

So she called me after she got into town and was at the grocery.  She said she was so hungry she couldn’t even think.  Her hiker legs are in full force and now the hiker hunger has kicked in.  She mentioned that she thought she was starting to hit the wall, just getting really tired.  There is no regret to the decision to thru-hike again and everyday is a good day.  Of course everyday is also a bad day, ha.  She did say that when she’s in a shelter with her shoes off its a really good day!  Remember the really bad day with a muddy shoe/leg and a bent pole from her fall??  Well, she met a man on the trail that bent her pole back.  I asked how he did it and she said ‘with his big man hands!’  She does have a hole in each sock and I asked if she wanted me to send new ones, ‘nope, I’ll just switch them onto opposite feet until there are holes on the other side’.  Ok then, that’s a positive way to look at it and getting your moneys worth at the same time.  She wished it wasn’t raining because it will be hard to go out in the rain to get back on the trail, but she also doesn’t want to stay in town and spend extra money.  We said good-by, I told her to call later, she was off to find breakfast, coffee and resupply. 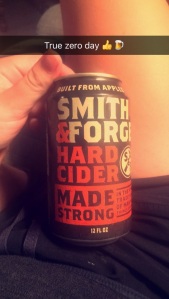 I didn’t talk to her until the next day.  She said ‘guess where I am,’ no idea where?  ‘Still in town’ she said, ‘I just didn’t want to leave and hike in the rain.’  I guess a few hiker guys knew a friend that had an apartment in Lincoln and weren’t using it at the time.  Score!  They all got beds, showers, laundry, good meals and stayed in out of the rain!!!  There’s a saying ‘the trail provides.’ I’ve heard story after story that proves this saying true over and over and yes it does.  The trail gives you what you need, right when you need it.  So she was re-charged and ready to walk out of New Hampshire.  Looks like 2 of the hardest states down and 12 left to go! It’s all downhill from here, right??

Just a quick update then I’ll post all the Maine video that Mouse has sent. So Maine would not let her go. She said she was so in love with Maine then the last 4 miles she hated it! But, after 18 days she has entered New Hampshire and started hiking in the White Mountains. The Whites were one of her favorites last year so she was excited to get started. Over the last few days and miles of Maine she fell knee deep in a muddy bog, drastically bent one of her trekking poles, slid sideways down a mountain, spent the night in a terrible thunder storm that shook the shelter and her hiker hunger has kicked in so she’s always hungry.  After you watch the videos you’ll wonder why she’s still out there, crazy girl.  But, she wants everyone to have a real experience and see the good, the bad and the ugly of the trail. Also, that you experience several emotions everyday along with hating and loving the AT at the same time.  With that being said, she hasn’t regretted being out there and she really is enjoying it.  Sorry there are so many this time, just got them all at once.  So . . . I present to you  . . . ‘hiking with Mighty Mouse’

So there you go, 18 days of Maine. Next up the Presidential Mountains in the beautiful White Mountain National Forrest of New Hampshire.

Catch up on past items