“The Pacific Crest Trail (commonly abbreviated as the PCT, and officially designated as the Pacific Crest National Scenic Trail) is a long-distance hiking trail closely aligned with the highest portion of the Sierra Nevada and Cascade mountain ranges, which lie 100 to 150 miles east of the U.S. Pacific coast. The trail’s southern terminus is on the U.S. border with Mexico,  and its northern terminus on the Canada–US border; its corridor through the U.S. is in the states of California, Oregon, and Washington.  The Pacific Crest Trail is 2,659 mi long and ranges in elevation from just above sea level at the Oregon–Washington border to 13,153 feet at Forester Pass in the Sierra Nevada. The route passes through 25 national forests and 7   national parks.”

We don’t have much contact on this hike, that’s for sure.  Sarra has her ‘find me spot’ which works off satellite and gives me her coordinates when she hits the button each night.  I find that comforting.  There are not many places with cell service and she usually leaves her phone off to save on the battery.  So we only catch up when she gets to a town, which can sometimes be a week at a time.  When she calls, I jot down some notes so I can type type up her adventures.  I keep track of her location by looking in a PCT data book and on a map after I get her location every few days.  Mostly we’ll post pictures.  They have been just beautiful.

July 4, 2018 – Got a good-bye call from Mouse today, here we go again.  After Arapaho Basin closed for the ski season Duncan and Sarra traveled around a bit to Buena Vista CO and Lubec ME.  After getting back to Denver they got packed up and picked up Shawn.  Then, took off on a little road trip stopping at the Salt Flats in UT, Portland OR and made their way to Seattle Washington.  A friend drove them about 5 hours to the Pacific Crest Trail at Harts Pass, mile 2628 for northbound hikers who have started in Mexico.  Mouse, D and Worm were hiking southbound though.  So, after their friend dropped them off on the trail, they had to hike around 30 miles north to the boarder, took pictures at the PCT monument and they officially started their PCT hike on July 6, 2018 heading south. 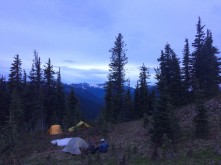 July 8, 2018– Mazama, WA at Rainy Pass – 60 miles in.  Hiking has been incredible.  It’s a lot like hiking in Summit County where they live in Colorado, but with an obvious path.  But so different from the AT path where there was a white strip on tree after tree.  So far after 60 miles they’ve only seen 3 PCT signs.  They had to put up tents in the rain, but have had great weather so far.  They’ve seen more hikers than they expected.  Food has been awesome, she is eating a lot of ramen and couscous with spices.  They’ve been getting a lot of free stuff to eat from the hiker boxes (boxes put at stops where hikers toss in what they don’t want and grab what they need) and so far, thinks she can do food cheap.  Her grocery resupply was only about $15 for 5 days.  They are feeling good – all that Colorado mountain hiking the past year has been great practice and they’ve started on day one doing 20-mile days!  After we hung up they were walking to a Trail Angels house to spend the night. 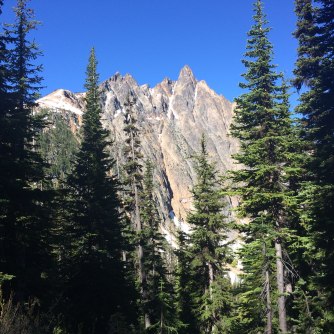 July 14, 2018 – Skykomish, WA – 184 miles in – Hiked until about 11:00 last night, have done some big day miles. The hiking is just unbelievable, just incredible views and still a good bit of snow.  The mountains have so much snow you could ski.  They’re using MICROspikes on their shoes.  They are kind of like snow chains you would put on your tires but for your feet in the snow. Such beautiful sunsets when they hike a summit, especially on Glacier Peak.  Everything is going well, feet are fine and feeling strong.   Back on trail tomorrow, but tonight camped out in a Trail Angels yard.

July 18, 2018 – Snoqualmie Pass, WA – 258 miles, hanging out at the Drew Brew – Today we couldn’t get Facetime to work.  I told Sarra to just call me and she said, ‘but I like to see your face 😊.  So, we talked on the phone and sent her a picture of my face then told her to send a picture to me of her face.  She said the mosquitoes are INSANE, they have to run from them!  At one point they ended up setting up the tents at 3:00 pm just to get in them and away from the mosquitoes.  Even then there was a ton hovering over the tent.  Back pack is good, it’s the least amount of stuff she’s ever carried. But, she feels like she’s better prepared even with less stuff.   Great weather still, no rain in 6 days.  They are mostly through the snow so she’s sending back her Yak tracks (to put on your shoes in the snow) and gloves.  She did leave a pair of socks at camp so now she’s down to one pair.  Today is a good morning, first night in a hotel last night so she took an energizing shower, watched the movie Mad Max and now getting ready for a big breakfast.  Then back on trail, next stop is White Pass.  The following pictures are from a previous fire at Mt. Baker-Snoqualmie National Forest. Nothing has started to grow back yet and Sarra said it was very sad and eerie to walk through.  It really makes me think about all the fires going on now and what all that land is going to look like. 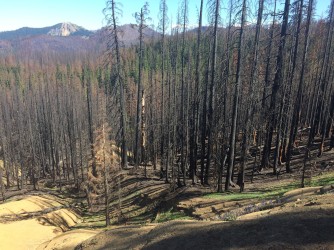 Burned in a previous forest Fire!

July 23, 2018 – Naches, WA Mt White Pass 357 miles in – this was a hard call for me as a mom.  Sarra was a little homesick and missing some girl time.  I mean she has been out traveling and hiking with two dudes for a couple months, that’s a lot of testosterone.  We had a great long phone conversation, but I still wanted to walk out of the house, drive to the airport and fly as close to where they were on the trail as I could.  But, that didn’t happen, although it didn’t stop me from checking it out to see if I could actually pull it off!!  I can’t explain how hard it is as a parent when your close with your kids and they are 2,249 miles away on a remote trail in the mountains.  But I digress, So the night before they had hiked 25 miles and kind of hit a weird spot at that point.  They all just knew what they had to do so they kept on walking another 10 plus miles and no one was talking.  They rolled up around 9:30 that night.  She said the mosquitos are still insane and that the long hike yesterday was really hard.  She’s got bug bites, blisters and missing friends and family in Indiana.  She said she feels like a whimp when her feet hurt.  The other bad thing is she travels with a ‘find me spot’ that runs off satellite since there is not always cell service and each night sends me her coordinates with a ‘safe and sound’ text.  It also sends me a ‘send help’ text with the coordinates if she gets in trouble (we haven’t had to use that yet, knock on wood).  Well, it’s laying on the trail.  So now she must replace the spot because that was my one request during this hike – I gotta get that text with her location each night.  The next morning, she called and was feeling better.  They are coming up on a 150 mile stretch and are carrying 6 days of food.  But when they are at that point the 512.6 PCT miles in Washing ton state will be behind them!!  Some say that is the hardest state and it’s where most people finish.  They hit the difficult part first and took off running (so to speak). 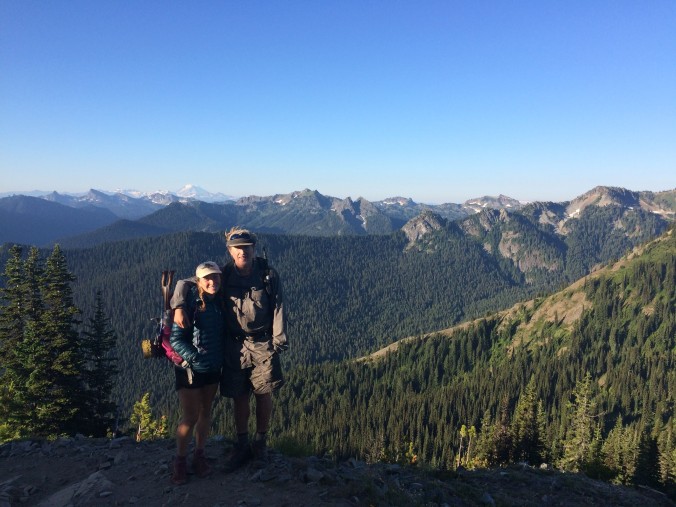 There you have it!!  Washington State was 512 trail miles and they got through it in just over 3 weeks!!  Pretty incredible.  Oregon is up next which is a total of 456 trail miles.  I’m going to close this blog with some awesome flower pictures, love the flower pictures she sends me. 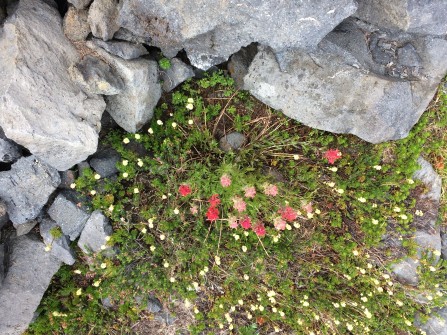 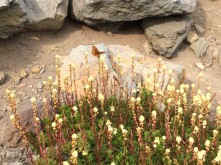 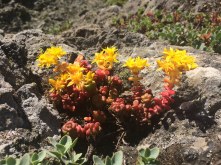 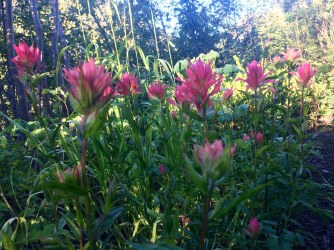 Catch up on past items